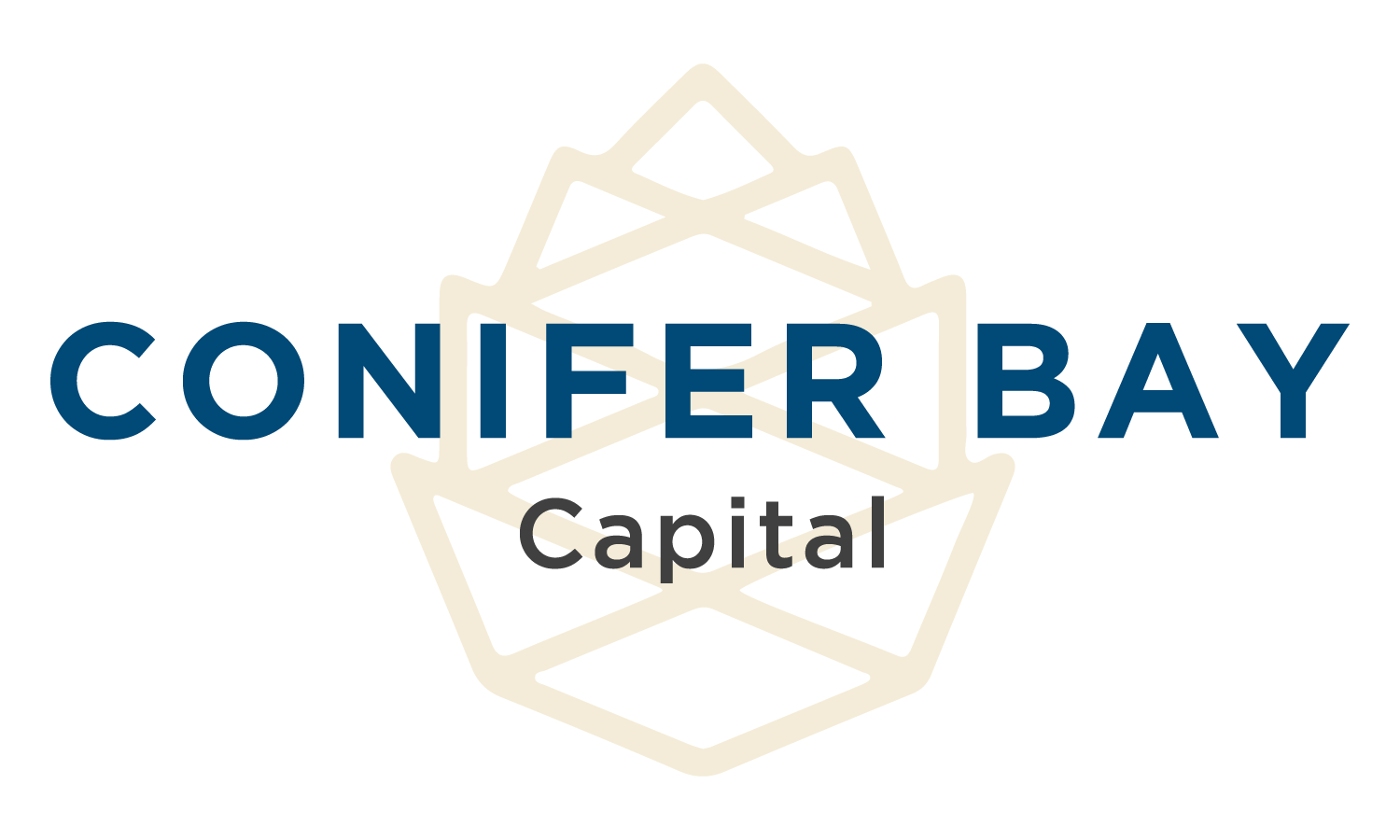 Despite a pandemic, massive job losses, and many Americans struggling, the U.S. stock market posted another terrific quarter, up 8.9%. This brings the 2020 total return into positive territory, up 5.6%. These headline returns tell only part of the story as the contrasts between growth and value stocks, large cap and small, and between sectors are all quite extreme. 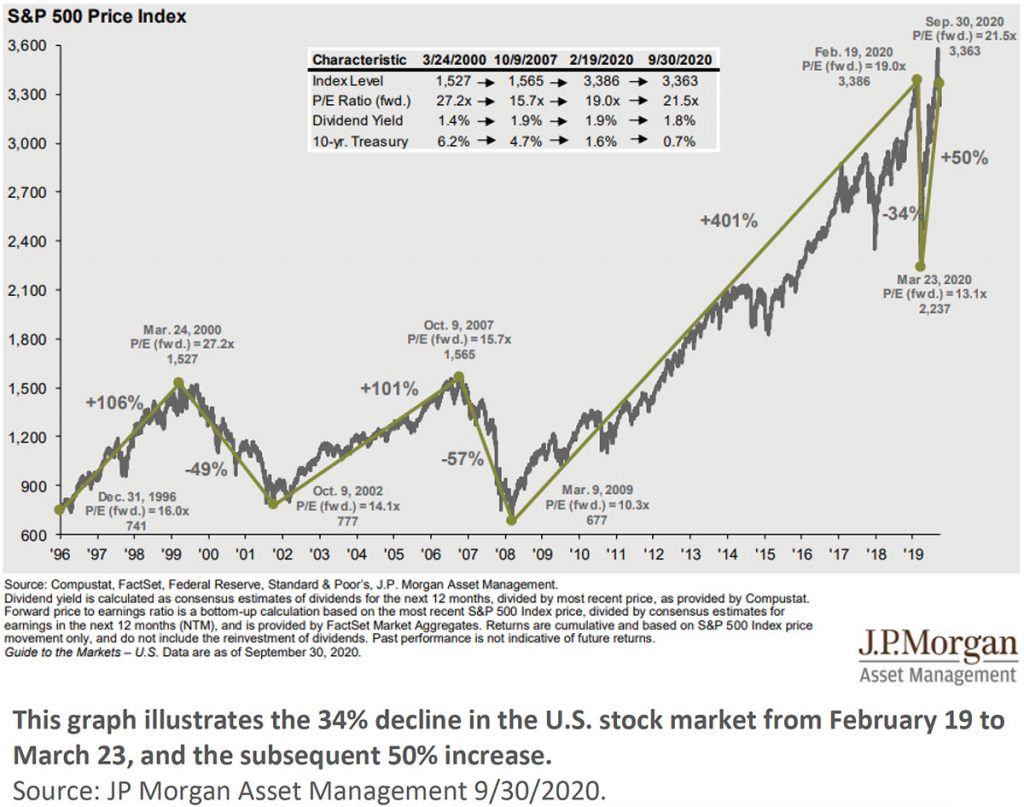 Year-to-date, growth stocks in the S&P 500 are up over 20% while value stocks are -11.5%. Large cap Russell 1000 stocks are up over 6% while the smaller Russell 2000 stocks are -8.7%. These gargantuan differences appear not only in the U.S. but also in foreign developed and emerging markets. Market returns reflect the starkly different impacts of Coronavirus on financial markets. 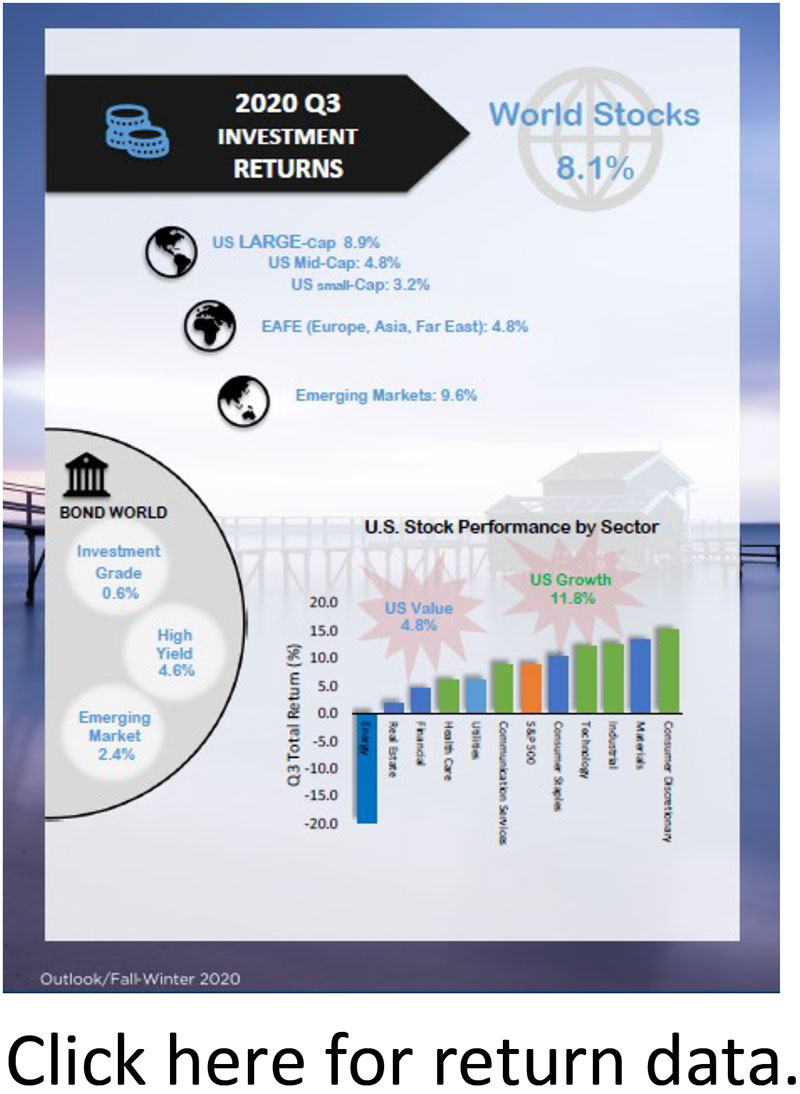 Dozens of retailers have entered bankruptcy, including J.C. Penny, Neiman Marcus, J. Crew, Pier 1, Brooks Brothers, Sur La Table, Hertz, and Lord & Taylor. On the contrary, in another economically sensitive sector, housing starts are surging with increases of 20%+ relative to the prior year. 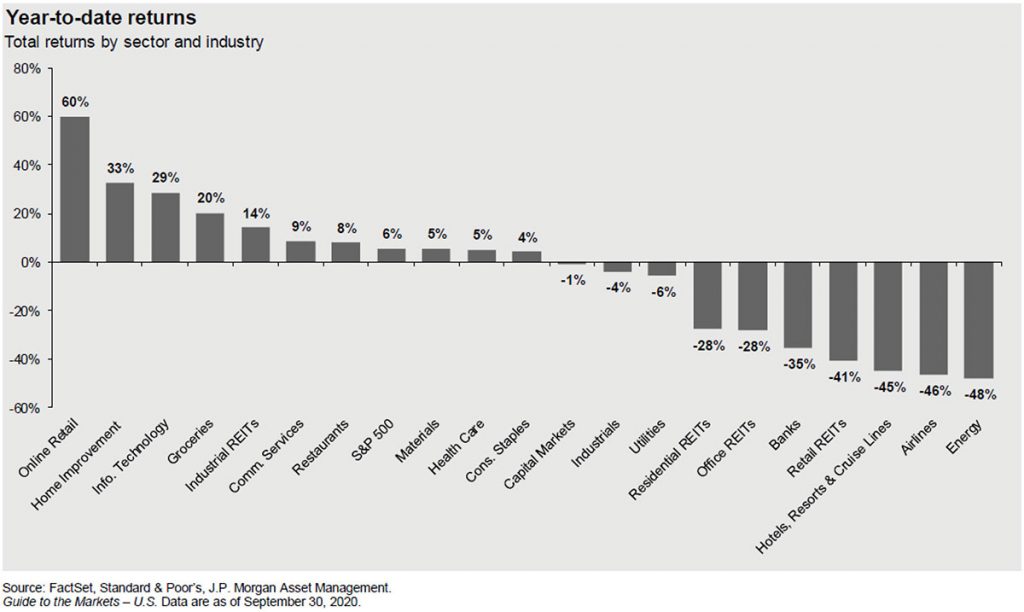 The Economics Behind the Markets
From an economics perspective, this year will likely go down in history as the shortest recession ever. This determination will be made by the National Bureau of Economic Research (NBER), the authority that classifies a recession as a period with at least two consecutive quarters of economic decline. With Q1 GDP down 3% and Q2 down 34%, the NBER metrics have clearly been met. If Q3 GDP comes in near the projected gain of 23%, this recession may be considered over.

The speed of this latest compact and brisk economic cycle is remarkable because in 2019 the U.S. was experiencing one of the longest and slowest economic expansions post-global financial crisis. The quick recovery of the world economy from the sudden COVID recession is partly due to massive stimulus actions by many of the largest countries.

Meanwhile, federal interest rate policy has again reached the 0% floor in the U.S.. The Federal Reserve has been transparent, suggesting that rates would remain low for two years. After the financial crisis, it took the Fed 7 years to raise interest rates. Perhaps it is optimistic to anticipate rate increases in just two years. The actual timing of stimulus removal will depend on factors including the pandemic’s duration, how quickly job growth recovers, and U.S. inflation. 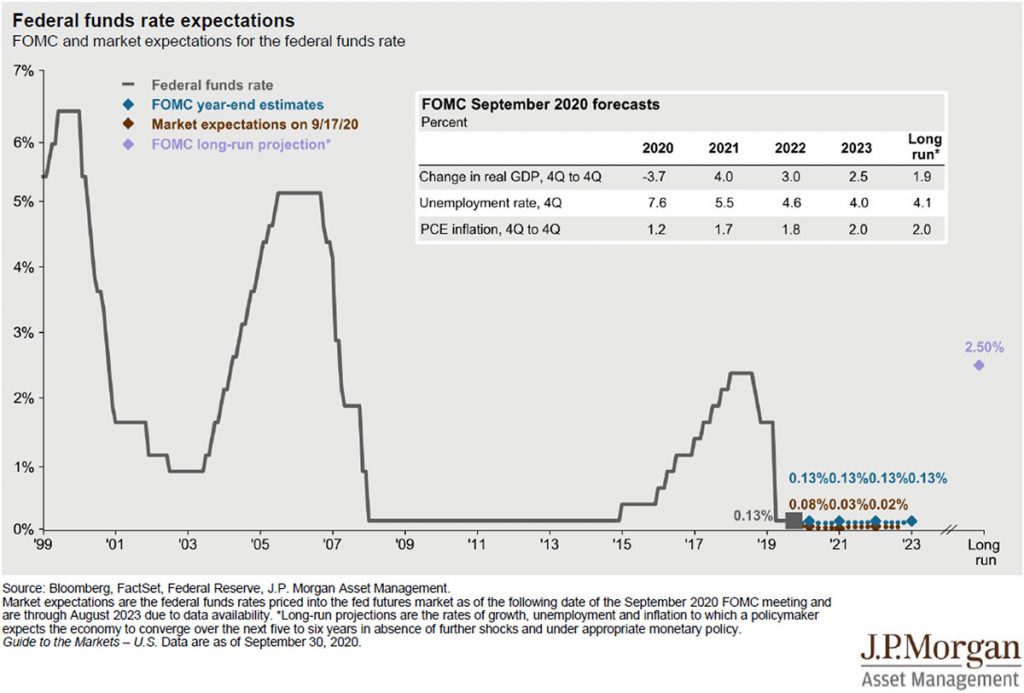 Looming in the background for monetary policy experts is the specter of Japan’s economy, which has suffered from deflation and slow economic growth for three decades. To avoid a similar outcome in the U.S., the Federal Reserve may err on the side of maintaining rates too low for too long. U.S. inflation may need to reach 2.3% before this low interest rate era comes to an end.

This stimulus has left governments in an increasingly difficult financial position with record budget deficits, massive debt, and large commitments to entitlement programs. Still to emerge are the calls for austerity, such as in Europe following the global financial crisis. While campaigning U.S. politicians may hint at pension and entitlement reform, legislation appears to focus on taxation as a short-term means of resolving government deficits. 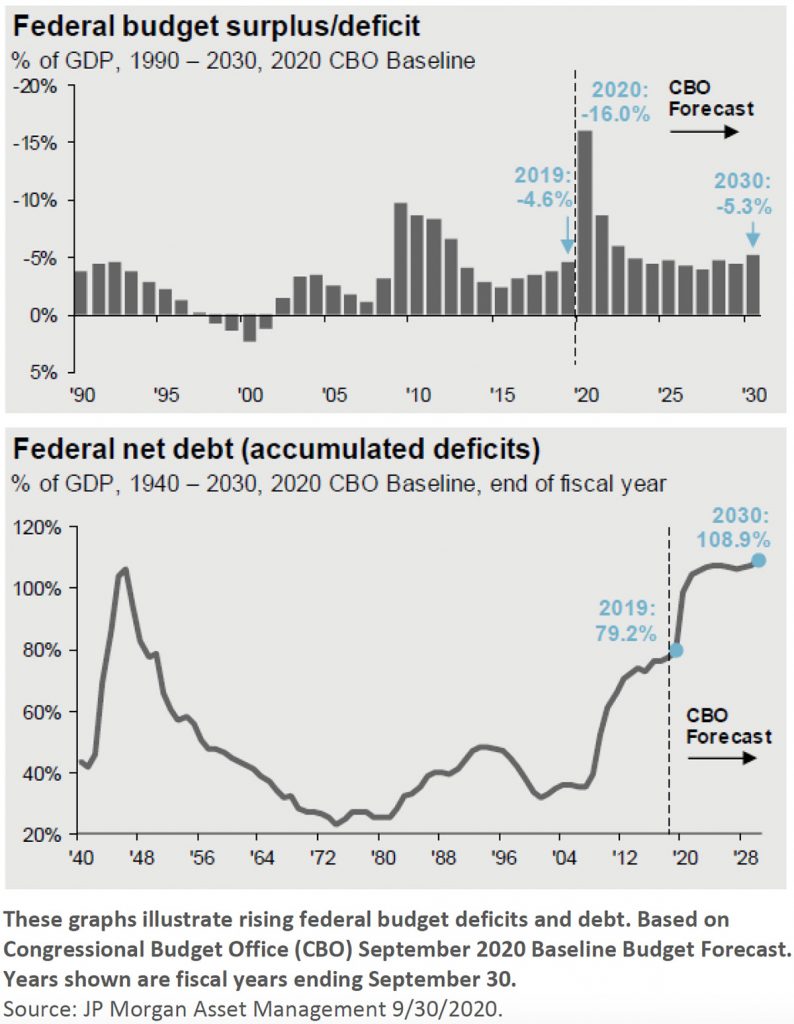 For example, Illinois Governor J.B. Pritzker identified state pension obligations as the state’s biggest challenge. Yet an upcoming ballot measure would amend the state constitution to allow for a graduated-rate tax structure. In the federal contest, the Biden-Harris tax plan calls for increases in income, capital gains, corporate, and estate taxes, along with reductions for items like charitable giving.

Looking into the future, one of the biggest concerns with low interest rates and high deficits is that federal and state governments will have less ability to respond in the next recession or financial crisis.

Our Outlook
As often occurs, investors are left to navigate a choppy river filled with cross-currents. The future looks simultaneously rosy and treacherous.

In the bond market, investment grade bonds look reasonably secure but have yields of next to nothing. Although retirees and income-oriented investors would welcome higher interest rates, the bond market may be no source of joy for the next 3-5 years.

Conifer Bay Capital has been shifting many investors away from investment grade bonds toward high yield (junk, or below investment grade) bonds. This is not an easy decision because this sector brings higher risk and greater correlations with equity returns, which is not necessarily desirable in a bond portfolio.

In the stock market, large cap growth stocks have performed extremely well. Their valuations, however, are extreme. Stocks could decline 25% and only reach average valuations over the past 25 years. 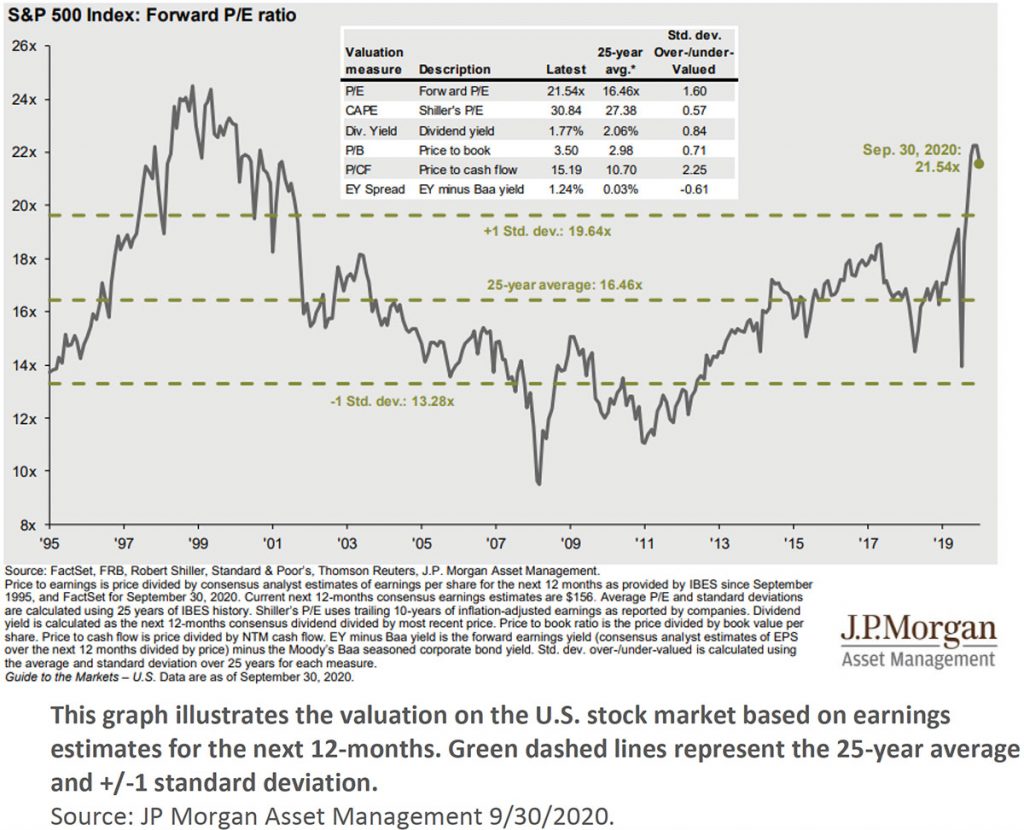 As has been the push for a few years, opportunities appear brighter in foreign and emerging equity markets, and in small cap and value stocks. Conifer Bay Capital has been chipping away at holdings in large cap and growth investments that have performed well, reinvesting the capital in underperforming sectors. A warning to readers: These moves have not been rewarded, as U.S. large cap growth stocks continue to lead.

Given the uncertainty around stocks and bonds, many client portfolios are now holding precious metals. Investing in gold requires some unique considerations but the backdrop of market uncertainty, rising inflation, and potentially a weakening U.S. dollar could cause gold prices to rise even higher.

A final thought to keep in mind: One of the challenges for investors today is not to look at the investment landscape as the end of a slow 10-year recovery from the great financial crisis, but instead as the beginning of a new post-COVID cycle. The coming cycle may not look like the last one. We are working hard to identify what themes will dominate in the coming years.

This information is for educational purposes and does not constitute tax advice, legal advice, accounting services or professional consulting of any kind. The information provided herein should not be used as a substitute for consultation with professional tax, accounting, legal or other competent advisers. Before making any decision or taking any action, you should consult a professional advisor who has been provided with all pertinent facts relevant to your particular situation.